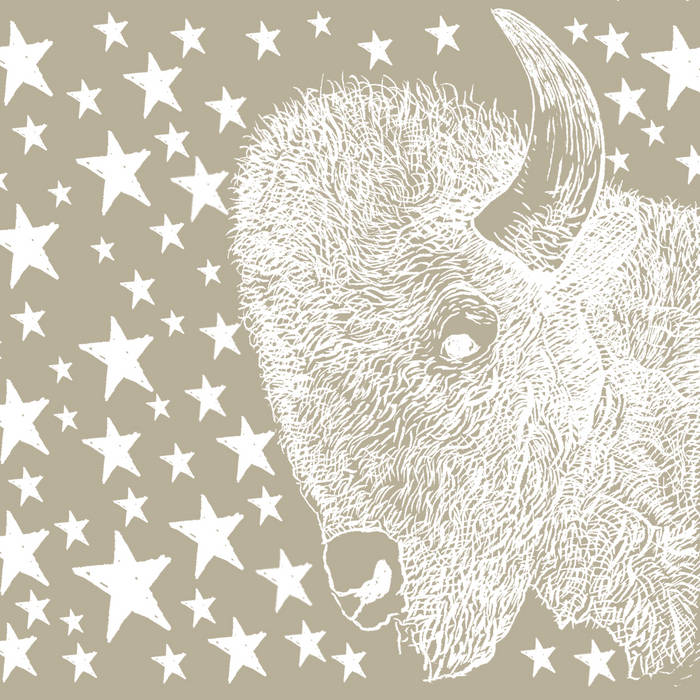 conceived of and created by John Hitchcock
brought to life by the musicians of Madison, WI

Artist John Hitchcock’s Bury the Hatchet shares the past and present of the Wichita Mountains of Oklahoma through visual Art and sound performance about the American Frontier. Bury the Hatchet explores the intersection between cultures through the land, language, and the visual symbols of the Great Plains – the epicenter for Plains tribal culture. The basis for Bury the Hatchet revolves around the relationship between the Fort Sill Military Base (Lawton, Oklahoma), The Wichita Mountains Wildlife Reserve, Medicine Park, Oklahoma and his family’s Comanche Tribal Land off of State Highway Forty-Nine, Oklahoma.

The exhibition consists of a series of works on paper titled The Flatlander and a multi-media sound installation. Working from the theme of the Buffalo Bill Wild West Show, Bury the Hatchet explores issues of assimilation, acculturation, and indoctrination.

Through oral history and music, the Bury the Hatchet music recording intertwines storytelling and Kiowa & Comanche songs with soundscapes of steel guitar, cello, clarinet, accordion and guitars. Bury the Hatchet challenges the romanticized version of the American Frontier (Wild West themes) in combination with current conditions.

Bury the Hatchet acts to interrogate the historic and modern institutions and develop a language to re-define the present times. Hitchcock’s grandfather Saukwaukee John Dussome Reid’s (Kiowa) voice cuts through the sound by telling a story of the old days on the southern plains in the songs “Star House/Set’tainte Song” and “Jimmy Creek (A Comanche Story)”. This story was told to Johnny Reid when he was hospitalized in the 1930’s with a 103-year-old Comanche elder named Tahen. Johnny Reid recorded his story on a reel-to-reel player, which Hitchcock translated to a cassette and now into digital format as part of Bury the Hatchet.

On several songs, Jason Cutnose (Kiowa) interprets the Plains of Oklahoma and Texas through three Kiowa stories. The first story featured on “Saddle Mountain” and several other songs, speaks about the massacre of several Kiowa women, men and children at Cutthroat Gap. The second story featured in “Rainy Mountain Falling Stars” speaks about the 1833 Leonid meteor shower and the recording of the stars with earth pigment on the Kiowa Buffalo hide calendar. The third story featured in “Lone Wolf and the War with Texas (Meers Road Part 1)” talks about the Kiowa Chief Lone Wolf (Gui-Pah-Go) and his dispute with Texas Rangers and the US Military.

Both John Dussome Reid and Jason Cutnose’s recorded voice challenges the western perspective of the written word by reinforcing indigenous views of oral history passed on from generation to generation through storytelling.

Bandcamp Daily  your guide to the world of Bandcamp

Cannibal Corpse's George "Corpsegrinder" Fisher stops by for an interview